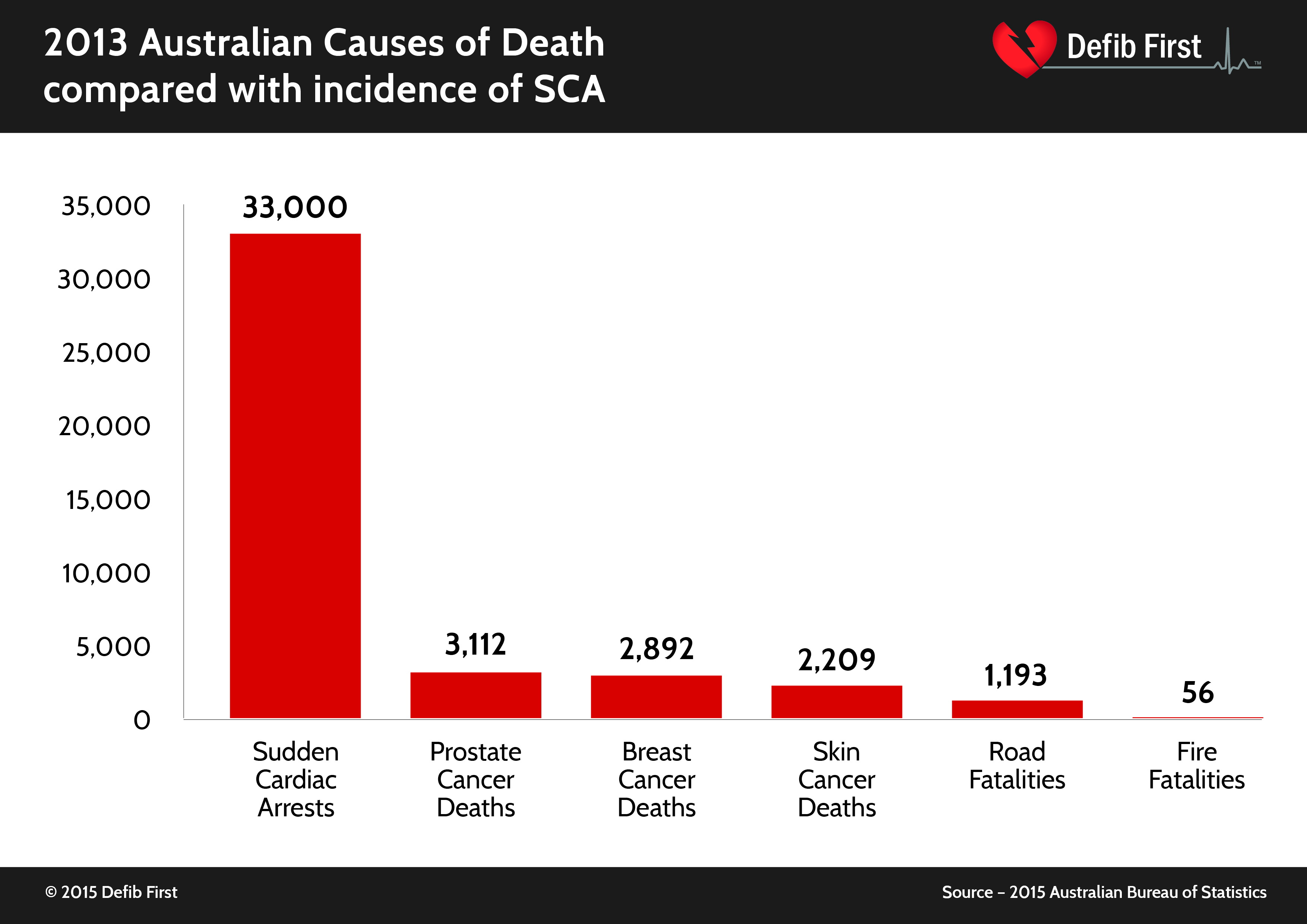 In 1969 there were 1034 road fatalities in Victoria which prompted Victoria Police to ‘Declare War on 1034’ with the objective of reducing the road toll.

The effectiveness of funding, law enforcement and increased awareness has lowered the road toll in Victoria to 249 in 2014 – a 75% reduction in deaths over more than 45 years.

Each year in Australia, it is estimated that there are 33,000 sudden cardiac arrests (6000 in Victoria), with 75% or approximately 25,000 occurring outside of a hospital. Cardiac arrest is the one cause of death that relies on the bystander witness i.e. the person standing next to the victim to take action to save their life. Without early CPR and most importantly early defibrillation, less than 5% of cardiac arrest victims survive. If an automated external defibrillator (AED) is applied within 3-5 minutes to a victim of cardiac arrest, their chance of survival increases to over 80%. For every minute of delay, the likelihood of survival decreases by 10%.

The problem is there are too few AEDs in the workplace and community and too few people who know why or how to use them. Cardiac arrest is reversible if there is immediate action and yet there is no funding, legislation, education or public awareness campaigns to address this significant public health issue.

The road fatality strategies have been successful and thankfully many lives have been saved. There is the potential, however, to save as many lives in one year from cardiac arrest as has been saved in 45 years from road trauma.

This is not an argument against road safety campaigns. They are necessary and have worked. It is an argument however to pay more attention to the leading cause of death in this country especially when the solution is so simple and easy to use.

AEDs save lives – they are safe, reliable, effective and cannot be used inappropriately. They cannot shock the wrong person or someone that does not need defibrillation. Rescuers cannot kill someone who is in cardiac arrest or be held liable or sued for applying an AED because the victim is already dead. Any attempt at resuscitation is better than no attempt. Everyone in the community can become an urban lifesaver if they are educated on why and how to use an AED.

Fire extinguishers and smoke detector alarms are compulsory and regular testing and tagging of fire equipment is mandated. As a result of fire protection regulation, there were only 56 fire or smoke related deaths recorded in Australia in 2013. Once again, legislation, education and awareness have dramatically reduced fatalities.

Comparing cardiac arrest with fire/smoke fatalities, it is 590 times more likely that a member of the public will have to deal with a cardiac arrest than a death by fire.

We now need to Declare War on Cardiac Arrest and thousands of lives will be saved as a result.