AEDs in the Workplace

A February 2014 Media Release from the Minister of Health, State Government of Victoria states:

“Patients who received CPR from community members, particularly those who were treated with public defibrillators, to get their hearts beating again in the vital minutes before paramedics arrived, had even better survival rates.” The use of automated external defibrillators by members of the public on cardiac arrest patients has increased from one per cent in 2003/04 to 10 per cent in 2012/13.

“Early defibrillation by community members achieved the most favorable survival rates for people who suffer a cardiac arrest.”

As many people as possible are encouraged to receive basic training in the use of defibrillators, which are real life-savers in the event of a cardiac arrest.

“More bystanders than ever are recognising cardiac arrests and providing lifesaving resuscitation before paramedics arrive, greatly improving the chances of survival.” 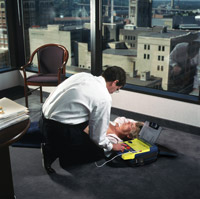 Placement of AEDs in workplaces is recommended & highly encouraged. The most significant Safety objective is to save lives however other commercial incentives include optimal OH&S, Duty of Care; Reduced Lost Time Injury; Reduced Liability; Improved Productivity with less sick leave and/or death; reduced costs associated with replacing employees.

Keeping an AED in workplace premises is as important as keeping a Fire Extinguisher, First Aid Kit and Evacuation Plan.  Early access (within 5 minutes) to defibrillation is the first line of treatment in cardiac arrest.